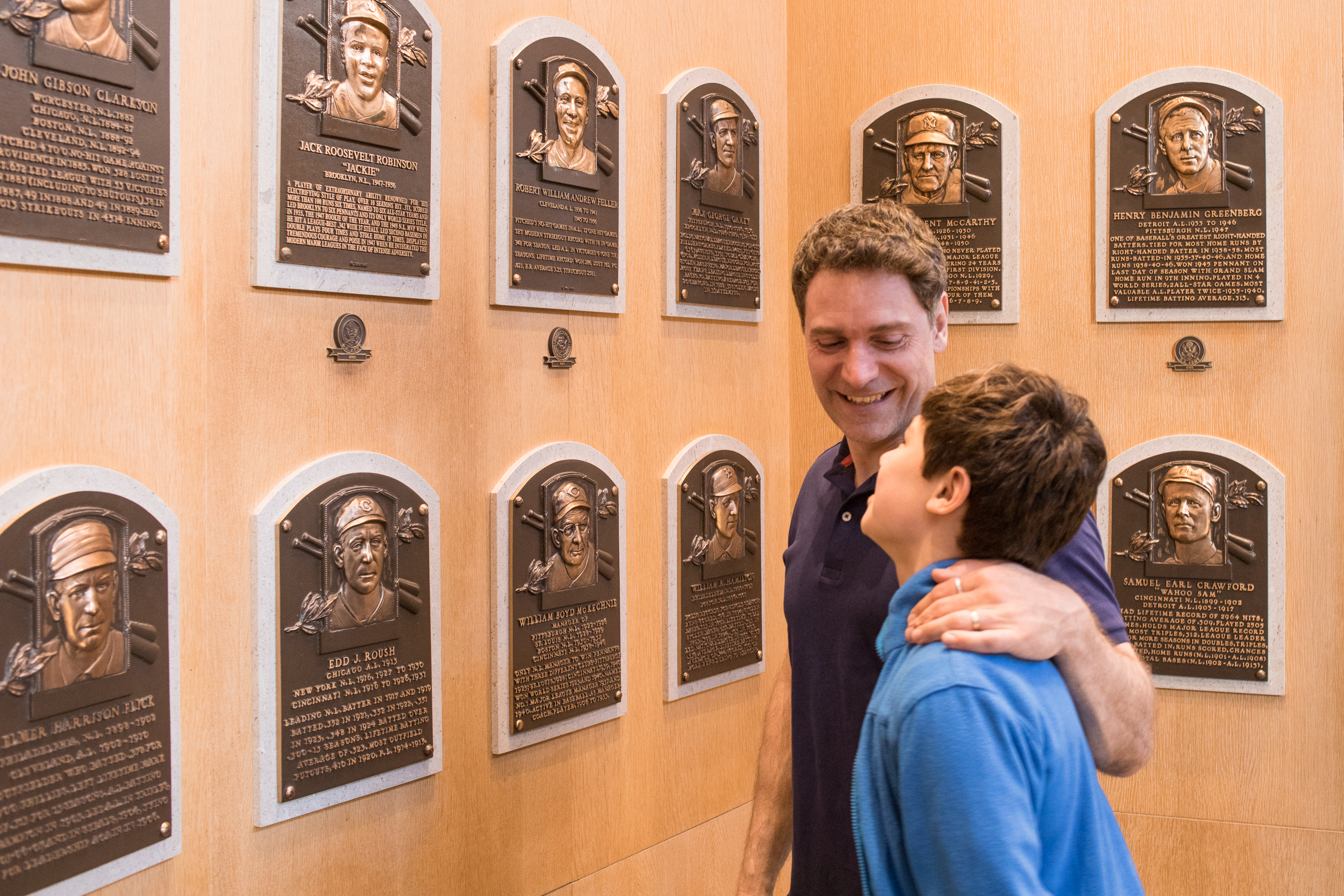 Just in time for Opening Day of the Major League Baseball season on April 7, a trio of baseball-oriented destinations in New York, Pennsylvania and Maryland have organized the ultimate road trip for travelers who are ready to get out of their dugouts this year for a long-overdue “away game,” whether their roster includes kids, a significant other, or a favorite friend.

The “Round-Tripper” is a baseball-themed triple play that encourages visitors to follow the path of the Susquehanna River as it winds its way along a 444-mile path, beginning, passing through and ending in three of the most baseball-centric places in America: Cooperstown, New York, the Endless Mountains of Pennsylvania, and Harford County, Maryland.

Cooperstown is the birthplace of America’s favorite pastime. Visitors from near and far flock to the region to discover the nation’s rich baseball history while saluting their favorite players and icons. Our baseball-centric village allows you to park in one spot and just stroll down Main Street for many of these experiences, with baseball being there each step of the way. You may also choose to drive a short distance outside the village for additional experiences that are just a base hit away.

Driving from Cooperstown, New York to Harford County, Maryland (this tour can also be completed in reverse order)

**Right along or just off Main Street in the village of Cooperstown, an easy walk from the Hall of Fame

This well-known stop honors baseball legends, managers, executives and umpires who have contributed greatly to the sport. Dive into baseball’s past, present and future through a variety of interactive exhibits spanning more than 150 years. Fans come from all over the country to see artifacts from their favorite team, their idol’s name in the Hall of Fame, or even just to better understand the sport that’s known as America’s Pastime.

Named for Abner Doubleday, the fabled inventor of the sport of baseball, this stadium is located just a few blocks from the National Baseball Hall of Fame. It has hosted thousands of baseball games, including serving as the home of the MLB Hall of Fame Classic Weekend for 65 years.

Estimated Time: 15 minutes or a 45-minute tour with advance registration

A town known for baseball MUST have plenty of hot dogs, right? You’ll find them on practically every restaurant menu, but we definitely recommend Cooperstown Diner, Doubleday Café and Jerry’s Place.

This brewery offers craft beers and non-alcoholic beverages named for everyone’s favorite game. For the kids in your party, try a Pop Fly Ginger Beer. For the over-21 crowd, a Bambino Ale or Induction Summer Ale might hit the spot. (Note that Cooperstown Brewing Company is open seasonally and offers beverages only, no food.)

The distillery operates both a production facility and tasting room in the village. The tasting room is located a short walk from the Hall of Fame, making it a perfect resting spot after a day at the museum. The distillery sells its signature beverages in baseball-shaped decanters of various sizes. Among its spirits are a trio of “Abner Doubleday” blends – a bourbon, vodka and American whiskey (get a sampling of each in “Triple Play” package), Spitball Cinnamon Whiskey, and Beanball Bourbon. During the annual Hall of Fame induction weekend, the tasting room’s bartenders create special drinks that pay tribute to each of the year’s inductees.

This bat company is the third oldest in the United States. A short walk from the National Baseball Hall of Fame, the company’s Main Street retail shop specializes in custom game bats for everyone from the tiniest tee-ball participants to professional baseball players. The shop can create customized bats for same-day orders, making a perfect souvenir of a visit to the village.

Where It All Began Bat Company

Where It All Began offers an exclusive inventory of bats for play and display. It specializes in a wide selection of wooden bats from Louisville Slugger and Rawlings – perfect for personalization as a gift or keepsake.

If you’re on the hunt for a classic wooden baseball bat, look no further. Located on the outskirts of Cooperstown, the factory offers amazing custom engraved bats, awards and gifts.

This shop offers sophisticated apparel for those passionate about the game. Peruse an extensive line of caps, outerwear, footwear, accessories, and tributes to baseball legends including Roberto Clemente, Ken Griffey Jr., Babe Ruth and Ted Williams.

This shop focuses on those pieces of baseball history that your mom tried to toss when she cleaned out the attic … baseball cards. They specialize in Topps baseball cards and just opened their Cooperstown lcoation a few hundred feet from the Hall of Fame.

This is your one-stop-shop for baseball merchandise. It features a wide offering of baseball cards, vintage collectibles, and more than 500 baseball caps from the Major League, Minor League, Cooperstown Collection and Negro Leagues.

This shop provides a vast selection of baseball paraphernalia, clothing, gifts and more.

The Rumble Ponies are a Minor League Baseball team based in Binghamton, New York. The team is the Double-A affiliate of the New York Mets. The Rumble Ponies play in Mirabito Stadium and you can find their 2022 schedule HERE.

From children looking for an adventure to artists looking for inspiration, the world's largest glass museum offers the opportunity to browse 3,500 years of glassmaking history in its galleries. The collection includes decorative glass bats that illustrate the bridge between creativity and sportsmanship … and which can be purchased as a unique souvenir.

The mission of the World of Little League: Peter J. McGovern Museum and Official Store is to inform and educate visitors about the history, service, goals and initiatives of Little League Baseball and Softball. The museum obtains and curates artifacts and archival materials from the world’s largest organized youth sports program and presents them in a way that’s both informative and entertaining. Hundreds of these artifacts are on display and the museum’s exhibits, and thousands more are curated in the archives.

Historic Bowman Field, the second oldest Minor League Baseball park in the United States, is a must-visit for fans of the game. It’s now home to the Williamsport Crosscutters, a collegiate summer baseball team of the MLB Draft League. Serving as a showcase for draft-eligible players, these games allow spectators to watch up-and-coming stars as they’re moving up the professional ranks. You can find a schedule of the Crosscutters’ 2022 games HERE.

The Rumble Ponies are a Minor League Baseball team based in Binghamton, New York. The team is the Double-A affiliate of the New York Mets. The Rumble Ponies play in Mirabito Stadium and you can find their 2022 schedule HERE.

Christopher “Christy” Mathewson pitched for the New York Giants for 17 seasons and is considered one of the top 10 pitchers of all time, with leading stats in several areas. He was one of the five original inductees elected into the National Baseball Hall of Fame in 1936. In honor of this baseball hero born and raised in Factoryville, Pennsylvania, the borough holds festivities around his birthdate, August 12. Stop by and visit Christy Mathewson Park, attend the annual “Christy Matthewson Days” event, and spend time at Keystone College (formerly Keystone Academy), where his legacy is honored.

Distance from Binghamton: 40- to 45-minute drive

Throughout the regular season, baseball fans can take in a game at PNC Field, home of the Scranton/Wilkes-Barre RailRiders, the AAA affiliate of the New York Yankees. On select dates, they can take one of the restored trolleys from the Electric City Trolley Museum in downtown Scranton to the park, enjoy a home game at the state-of-the-art PNC Field, then head back into town with a return ride on the popular trolley.

Distance from Factoryville to Scranton: 30- to 45-minute drive

Distance from Factoryville to PNC Field: 45- to 60-minute drive

The mission of the World of Little League: Peter J. McGovern Museum and Official Store is to inform and educate visitors about the history, service, goals and initiatives of Little League Baseball and Softball. The museum obtains and curates artifacts and archival materials from the world’s largest organized youth sports program and presents them in a way that’s both informative and entertaining. Hundreds of these artifacts are on display and the museum’s exhibits, and thousands more are curated in the archives.

Bottom of the Ninth: Harford County

The land the BallPark Restaurant is built on was once a baseball field used by the Susquehanna Semi-Professional Baseball League. The restaurant opened in 1948 and changed hands a few times until July of 1989, when Joy Frederick purchased it. While Frederick was the owner, she kept the spirit of baseball alive by lining the walls with baseball memorabilia. She also personalized the BallPark with homemade traditional foods and multiple additions to the building. In 2014, the current owner, Joe Weiman, Frederick’s son and an employee of 25 years, took over and keeps the baseball love alive.

Located in the hometown of the Ripkens – Cal Sr. (a player, scout, coach and manager), Cal Jr. (Baseball Hall of Famer) and Bill (an infielder-turned-sports radio host) – The Ripken Experience Aberdeen treats young players like Big Leaguers as they play games in stadiums that are replicas of some of the most notable Major League ballparks of the modern era, from the ivy at Wrigley Field to the Green Monster of Fenway Park. Of course, the local favorite is a two-thirds scale replica of Oriole Park at Camden Yards, where Cal Jr. made history. (Fun fact: At the Orioles’ previous home, Memorial Stadium, the Ripkens made sports history of a different kind on July 11, 1987 – Bill’s Major League debut – when a father managed his two sons playing in the same game at the same time during a Major League Baseball game for the first time ever.)

Ripken Stadium is the home of the Minor League Aberdeen IronBirds, an affiliate of the Baltimore Orioles in the High A East division. The team is owned by retired Baltimore Oriole and Baseball Hall of Famer Cal Ripken Jr., who purchased what was formerly known as the Utica Blue Sox and moved them to his hometown of Aberdeen in time for the 2002 season. The name “IronBirds” was chosen because of Ripken's “Ironman” streak of 2,632 consecutive games played with the Orioles, which go by the nickname “The Birds.” The team’s logo features a silver airplane marked with Ripken's familiar number 8, with the plane being a reference to the Aberdeen Proving Ground U.S. Army installation nearby.

Ernest Burke, born June 26, 1924, grew up in Havre de Grace and became one of the Marine Corps’ first Black enlistees. He began playing baseball as a member of the Marine Baseball team while stationed in Hawaii and in 1947 joined The Baltimore Elite Giants, part of the Negro Leagues, as a walk-on pitcher. Burke played for the Elites for two years. In 1949 he joined the Poughkeepsie-Kingston team in western New York as a pitcher, outfielder and third baseman. In 1950 and 1951, the left-handed hitter/right-handed pitcher played for St. Jean in the Canadian Provincial League. After baseball, he returned home to Maryland to work as a heavy equipment tester. A life-size clay model of Burke was erected in downtown Havre de Grace in June 2021; it was created by Austen Brantley, an African-American sculptor.

STRIKE THAT - reverse it!